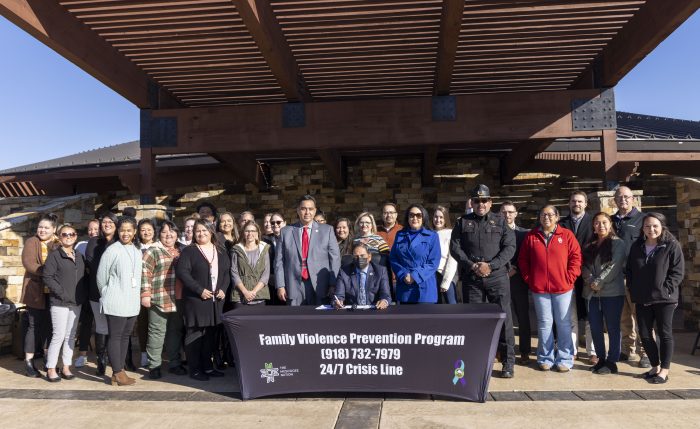 OKMULGEE, Okla. – On September 30, 2022, Principal Chief Hill signed into law historic legislation that will help strengthen the law enforcement and prosecutorial capabilities of Muscogee (Creek) Nation for crimes committed by non-Indians anywhere within the Creek Reservation.

The Muscogee (Creek) Nation Victim Protection and Jurisdiction Expansion Act provided amendments to various titles in the Nation’s Code of Laws to enact provisions of the federal Violence Against Women Act reauthorized by Congress in 2022 recognizing the right of tribes to exercise criminal authority over anyone, including non-Indians, for certain crimes committed on tribal lands.

“One of the greatest responsibilities of the Nation is to do all we can to strengthen our laws to provide for the protection and safety in our communities and for all who live and work in our Reservation, both Indian and non-Indian alike,” said Principal Chief Hill.  “I am thankful to the National Council for unanimously approving our proposed legislation appropriately titled the “Muscogee (Creek) Nation Victim Protection and Jurisdiction Expansion Act” to build upon our existing law to expand the Nation’s sovereign authority in the Reservation and so victims of crime do not go unheard.  I am also thankful for the hard work put into this legislation by the combined efforts of Lighthorse, the Attorney General’s office, Family Violence Prevention Program, and the Department of Community and Human Services.”

The new law authorizes the Nation’s Lighthorse Police and Attorney General’s office to investigate, arrest, and prosecute, and for the Nation’s courts to sentence, non-Indian offenders for the following crimes committed against an Indian within the Reservation boundaries: assault of tribal justice personnel, child violence, dating violence, domestic violence, obstruction of justice, sexual violence, sex trafficking, stalking, and violation of a protection order.  For the crimes of obstruction of justice or assault of tribal justice personnel, the victim may be Indian or non-Indian.

MCN Family Violence Prevention Program Director Shawn Partridge said, “The recognition of our criminal jurisdiction over non-Indians for additional crimes such as sexual violence in our Reservation is historic and long overdue.  The Nation’s Tribal justice professionals–from law enforcement, advocates, and prosecutors–are working tirelessly, day and night, and need every opportunity possible to ensure justice for victims/survivors and accountability for criminals who do harm on the Reservation.  We hope this expansion of authority continues to pave the way to full recognition of Nation criminal authority over all crimes committed by anyone on the Reservation.”